Residents of Burscough are being asked whether they are generally in favour of the Crabtree Lane railway crossing being closed to traffic and made useable by pedestrians only.

Residents have been told that the crossing will not be allowed to remain as it is, manually operated by the user. As one resident explains, this should be checked as being accurate and confirmed by looking at the Legislation or Regulations before accepting it as being an accurate account of the facts. He believes the crossing does have risks, but some of those risks can be mitigated by other means than automated barriers.

“The possibility of a pedestrian only crossing will make life a little more difficult for those of us who use it. However, in the long term, as development creeps ever closer and the A59 becomes more congested, shutting this to traffic may well turn out to be a blessing, as it could not be used as an ‘Alternative Route North” as has been suggested by someone connected with a survey of the location. If this happens, then it will destroy the peaceful life we are all so fortunate to enjoy here”.

“Automated Barriers. I object to this strongly for the reason above, but in terms of our justification for objecting to an Automated Barrier, then there is, in my belief, an overwhelming argument on grounds of safety. Pedestrians/Ramblers, cyclist, horse riders and ourselves will all be put to considerably greater risk, which far outweighs any reduction of risk at the railway achieved by changing the crossing”. 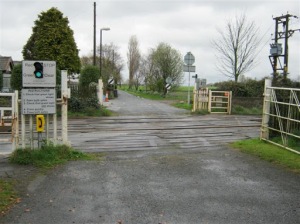 And the resident suggest that he is inclined towards a pedestrian only crossing, but “cannot give a definitive answer until all options have been made clear to us and discussed”. And “a word of caution; knowing how ‘Surveys and statistics’ are regularly manipulated, I can foresee the possibility of us being given a choice of 3 possible alternatives and if we all tick ‘Automated Barriers’ as our 3rd option, then the result will show that although it was not the preferred option of some of those canvassed, we all agreed it as an option”.

So “It is with this in mind, that my position is that this option should be excluded altogether on grounds of safety because any benefit in safety at the Railway will be heavily outweighed by increasing danger on Crabtree Lane and Red Cat Lane as outlined in previous correspondence. We cannot vote for anything which increases the risk to ourselves and others”.

“In terms of contact with the Town Council, there will be support from some Councillors who would be happy to argue our position. Just over 12 months ago, they asked us to vote in favour of the ‘Neighbourhood Plan’ we did, and now it is in place. It is there to help protect us and basically make Burscough a good place to live.

“In a WLBC Planning Meeting 2 weeks ago, our Town Council Leader quoted from the Neighbourhood Plan in objection to the next phase of the Development at Yew Tree Farm. His objections were over-ruled by the Planning Committee and so proved worthless on that occasion. There is no doubt that the Neighbourhood plan will be referred to on this occasion. It will contain elements which support our point of view, but may also have other parts which support an opposite view. I intend to ask which parts of the Neighbourhood plan are relevant for both sides of the argument so that there are no surprises ahead. You may wish to enquire as to whether the Plan will safeguard our location.

“Just because the public are not invited to contribute to the meeting on Thursday does not mean you may not express your thoughts. Let’s not  get caught sleeping”.