The misfortunes facing Serco are of their own making. Lower profits, the self-inflicted disastrous Beacon Park Golf Course landfill/royalties saga, reminded me of past indiscretions.

At the time, Serco was in partnership with Gatso, of hated speed camera fame, and signs appeared about the Serco piggy banks.

Tom Riall was head of the Serco Government Division, which oversaw 5,000 Gatso Cameras. But in May 2009 he got a six month ban for doing 103mph in a 70mph limit on the A14 in Newmarket, Suffolk. 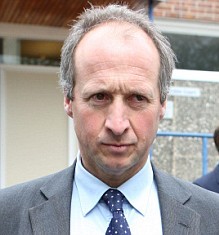 Speaking from his six-bed home in Ufton Nervet, Berks, Mr Riall said “No comment”. The boss of Britain’s biggest speed camera firm then faced calls to resign after he was banned. Riall was with his wife and three teenage children when he was pulled over.

In court Riall said a ban would cause him exceptional hardship because he would have to use savings set aside for his children’s school fees to employ drivers to take him to meetings. But magistrates dismissed the £150,000-a-year boss’s argument and gave him six penalty points. With seven points for two previous offences, this took him above the 12 needed for a six-month ban.

Road safety groups demanded he resign for his ‘extraordinarily reckless’ act. Jay Calascione of RoadPeace said “What example is he setting for his own children?’ And David Williams of the Guild of Experienced Motorists added “He should consider his position”.

Serco once led the Government-backed campaign “Safe Drive Stay Alive”. And Riall went on to receive a second driving ban or using his mobile on the M4. He got a six-month ban and £2,500 fine by Reading JPs for the offence near Langley, Berks. A Thames Valley Police spokesman said “We want to set an example and show people why they shouldn’t be on their phone whilst driving”.