Remember the headline above?

Well, it seems the Serco/Arbellio joint owned private but massively subsidised Merseyrail is still awaiting funding to support the drop in income during lockdown, despite Greater Manchester’s Metrolink receiving a £13m emergency package.

The transport secretary Grant Shapps had announced £283m would be allocated to bus and light rail services across the country, including £13m to assist Greater Manchester’s Metrolink network. However, this did not include funding for Merseyrail, which is not classed as light rail.

So the usual Serco bitching started and then both Manchester metro mayor Andy Burnham and Liverpool City Region mayor Steve Rotheram issued a joint call on Government to put money into Metrolink and Merseyrail, to assist with the running of services at a time when passenger numbers and income had dramatically dropped.

At the time, the leaders warned that without Government funding, the networks could cease to operate. Rotheram said that while Merseyrail was “keeping its head above water”, the Government had been “slow to respond” to requests for support as staffing was still required to keep services at a functional level.

During lockdown, Merseyrail passenger numbers across the 75-mile network dropped by 83% compared to its normal monthly average. Some services have started to be reinstated over the past week following cuts in frequency. 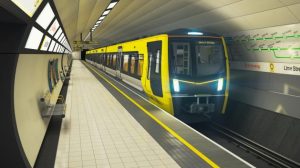 The Government is yet to offer funding to support the Liverpool City Region rail service during the Covid-19 crash in income, despite Mayor Steve Rotheram telling a parliamentary committee this week the picture for local transport networks was “stark”. But in May, Manchester received that £13m from the Government to support Metrolink, as part of £283m allocated to light rail and bus services across the country.

Across Merseyside, income from passenger fares has now dropped by 90% during lockdown, while local rail and bus capacity is at around 20% of pre-crisis levels, because of social distancing measures. Rotheram said Merseyrail services were losing £1.2m a week, but that it would carry on running a reduced service for key workers.

Well, my heart bleeds for Serco/Merseyrail. They operate a discriminatory policy to exclude West Lancashire elderly and disabled residents from the off peak concession while running the service into and out of borough. Time and again they have refused because LCC is the local transport authority. Yet LCC paid circa £1million of taxes for the upgrading of Ormskirk station.

As usual we sought the help of Rosie Cooper MP, and as usual she was rebuffed, this time by the “Rail Delivery Group”, the old “Association of Train Operating Companies”. This quango, The Rail Delivery Group, was established following the 2011 McNulty Rail Value for Money Study to provide policy and communications functions representing the views of train operator owning groups.

My Reply to Rosie, aka The Dialogue of the Deaf!

“Thank you for writing again about the lack of concessionary off peak rail travel for elderly and disabled residents of West Lancashire. It doesn’t come as a surprise that the Chief Executive of the Rail Delivery Group noted my comments with much interest but a lack of action. His response simply continues as the latest in a dialogue of the deaf.

“He’s just the latest in a long line of “Lord high everything else” who doesn’t appreciate that notwithstanding the public investment in Merseytravel/Merseyrail its profits go to private investors.

“Why should we put up with that situation? For the 52 weeks to 5 January 2019, Merseyrail reported turnover of £161.2m compared to £151.9m the previous 12 months. And operating profits were up from £17.2m to £17.8m, as were pre-tax profits from £16.95m to £17.98m. And the upward profits graph just keeps on rising. Profit per bum on seat per journey remains at over 40p. Yet Merseytravel won’t consider we elderly and disabled West Lancastrians showing our Nowcards, off peak, paying 40p, and helping the economy of Liverpool by our visits.

“I’m not sure which is worse, that we have to face endless refusals from Merseyside, or that there is no activity from West Lancashire Borough Council in respect of inequality and discrimination we face on a service into and out of West Lancashire.

“We’ve run out of options. Ten years or so ago the wretched Tory WLBC took away our travel concession. Today an equally wretched Labour WLBC with its total usable but idle reserves of £25.7m invests in property rather than people. I wish I knew how they can live with it!”