For “All our yesterdays” today we revisit October 27th 2017 entitled “How Small Sam Blasted The Mayor”. 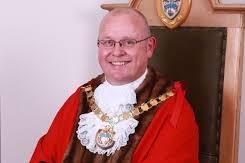 Mayor Neil Furey was “blasted by local councillor Sam Currrie” after a motion was put forward by the Labour group to accept a new Vice Chairman for a committee post previously held by Cllr Pryce-Roberts. Tory Cllr Currie Able Seaman RN Rtd questioned the decision and asked if it had anything to do with her poor attendance at meetings or her career as a senior lecturer at Southampton University.

Mayor Furey stated this was a personal attack on Cllr Pryce-Roberts and made a thinly veiled threat of legal action against Cllr Currie. Sam, having none of this is quoted “Frankly, if the mayor of West Lancashire doesn’t allow members to question the legitimacy of someone being on the council yet working some 250 miles away then I would question what his role is. His position is supposed to be apolitical but he seems adamant on going along with Labour “cover ups”

“The good people of Skelmersdale South have a right to know who their elected member is and as I stated on Wednesday before I was ordered to keep quiet, Cllr Pryce-Roberts should declare how much time she actually spends in West Lancashire. As for Cllr Furey’s “get my solicitor involved” comment I say “bring it on”. If speaking out against undemocratic members gets me into a spot of bother then so be it. My only concern is for the people of West Lancashire. Not for the feelings of the mayor or indeed any other elected Labour member”.

So for Sam Currie, whose concern was against undemocratic members and for the people of West Lancashire, the charge is surely of hypocrisy? To quote himself, “I would question what his role is”. To quote someone whose name I have forgotten “The Jury will now retire to consider its verdict of guilty”.