As you know, 99 year old pensioner and former tank commander Captain Tom Moore has raised over £25million for the NHS by walking in his garden. 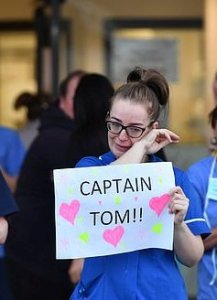 Putting it simply, he is a hero, as described by so many, he has captured the nation’s heart. He said “I think the amount raised demonstrates just how much we all value the dedication and sacrifices made by our NHS workers. I have fought during a war and they are now fighting in a war too”.

And zero, and evil? By comparison, a former singer Victoria Beckham with a disclosed personal fortune of £335million is grasping from we taxpayers by claiming government aid for 30 staff at her company. The family are reported to have spent £100,000 on a 21st birthday bash for their eldest child. Yet we tax-payers will fund 80 per cent of her company wages from the Government, up to £2,500 a month for each furloughed employee.

It’s reported that two weeks ago, Mrs Beckham and her ex-footballer husband David splashed out £17 million on a penthouse in Miami to add to their impressive property portfolio, which includes a £25 million mansion in Holland Park, West London, and a £6 million barn conversion in the Cotswolds, where the family has been living during the lockdown.

A source close to the family told The Mail on Sunday “One minute she and David are posting pictures of very expensive bottles of red wine on Instagram, including a £2,000 bottle of Romanee-Saint-Vivant Grand Cru red wine while dining at the exclusive Chez L’Ami Louis restaurant in Paris. The next she’s using the furlough scheme, funded by taxpayers. She has also been seen clapping the brave NHS workers, but by using the Government scheme she is taking public money when she has hundreds of millions in the bank. It seems very ill-advised”.

Ill-advised? Evil? Is it criminal? It should be. It disgraces them. We who still pay income tax on our pensions fund the NHS but we do not expect to see these filthy rich arseholes claiming what we as a nation will take many years to repay. It should be stopped, now!

Beckham appears to put fashion before coronavirus suffering and deaths of the public and NHS staff. It is truly appalling, the depths of greed some people will go to.