Just when will local Tory Party Leader Westley, currently Vice Chairman of the Borough Council Standards Committee, take responsibility for the heartache the family of Joan Spencer is feeling after his appalling mistake? 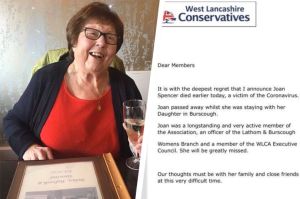 Westley is no stranger to controversy after his disgraceful accusations of “Aughtonians telling lies door to door” some years ago.

Lancslive has published more details of the sad episode and disclosed Westley declined to publicly apologise. Mrs Spencer’s son, Laurie Spencer, said “The whole family understand that a mistake can happen but were devastated when both Wesley and Julie Baxter were more than reluctant to rectify their mistake and dealt with the family with arrogance and lack of empathy”. 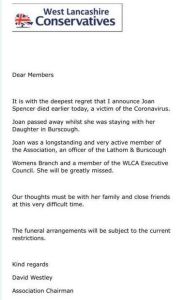 Westley wrote “It is with deepest regret that I announce Joan Spencer died earlier today, a victim of the coronavirus”.

Westley apologised for the mistake privately in a telephone conversation with Laurie on March 27. When approached by LancsLive he did not feel it was appropriate to issue a public statement with an apology. [Pics above courtesy of Lancslive]

Westley has held the Aughton & Downholland ward seat since 2002, Believe it or not, he is the Vice Chairman of the Borough Council Standards Committee,  for which he is required “To consider the best practice recommendations of the Committee on Standards in Public Life and to  recommend actions to ensure that the Council continues to exemplify best practice in local ethical standards”.

“Councils should include provisions in their code of conduct requiring councillors to comply with any formal standards investigation, and prohibiting trivial or malicious allegations by councillors”. 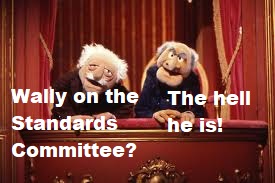 It will surely be a travesty of any WLBC standards if Westley doesn’t resign from the Standards Committee?