Our news of the poor attendance record of Cllr Sam Currie brought forth memories of his past “indiscretions” as reported here and elsewhere. In particular his appearance at the Question Time audience exposed on the BBC, March 2018. 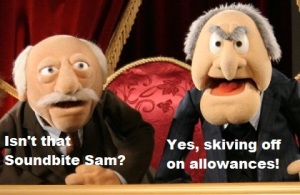 Because of the decision to cancel the May 2020 elections Cllr Currie has tweeted “…so it seems I will not be standing down in May. I look forward to 12 more months on @Westlancsbc”. Not good news for Aughton & Downholland in particular but WLBC council tax payers in general.

In our article we also wrote “This episode is one of complete contempt for the council tax payers who pay him £4,840 a year in allowances. He is hypocritical in his comments to the press and takes every opportunity he can to attack councillors who miss meetings, going so far as to make a personal attack on Cllr Nicola Pryce-Roberts because of her work away from West Lancashire. Perhaps she might have a wry smile on her face as she is a member of the same committee Currie missed?”

The honourable course of action would be for Cllr Currie NOT to look forward to 12 more months on WLBC”  but to resign and leave the seat vacant, saving taxpayers £4,840. Simple!