Yesterday the US Ambassador to the Court of St James, Ambassador Woody Johnson, made it perfectly and very publicly clear that the United States is ready to start formal trade talks the moment the UK leaves the EU. Unfortunately, unlike the US, the EU will not be ready.

Ambassador Johnson confirmed that the USA is ready to start agreeing new trade arrangements with the UK in two weeks’ time, on 01 February, the day after the United Kingdom exits the EU. How is it possible that the EU is not ready to start trade talks after all this time? [Who cares!] 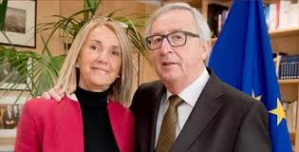 has just become the EU’s deputy chief Brexit negotiator, working with Barnier. She only started work one week ago, on Monday 06 January. In the 1980s Ms Martinez Alberola attended the College of Europe in Brussels, as well as the Université Libre de Bruxelles. Aged 56, she has only ever worked as a technocrat for the EU.

Once the Commission has produced its “negotiating mandate”, it then has to propose this to the EU27 governments for approval. It is expected that there will be some disagreements. Some governments will insist on prioritising certain issues, such as full access to British waters, whereas others will care far more about the bulk of the trading arrangements between the EU and the UK.

We expect this to be discussed at the General Affairs Council on 25 February although no agenda has yet been produced. Barnier himself “hopes” that the final mandate will be agreed by the end of Feb/early March. Only then can the first negotiating meetings with the UK’s team be planned.

We are where we are. And countries like the US are champing at the bit, whereas the EU donkey is plodding along at its own pace. This in itself shows how the British people chose the right course back in 2016?