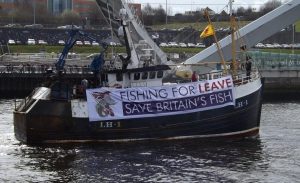 Brussels plans to hit Britain with a demand for access to UK fishing waters the day after Brexit, it has emerged. Sources said the plan was to make EU access to British waters a condition for any trade deal and to make the demand public on, or as close as possible, to February 1, if Boris Johnson wins a majority in the general election.

“That will be the day that reality hits home” one EU diplomat told The Telegraph. The European Commission began work on Monday on drawing up internal mandates for the trade negotiations that will begin once Britain leaves the EU on January 31, 2020.

British officials insist that Britain will be taking back control of its fishing waters. The ultimatum issued by Brussels on fishing yet again confirms the uncomfortable reality of the deal Britain is walking into with eyes wide shut. A reality which Fishing for Leave have been desperately pointing out but which is met with heads in a bucket of sand as it conflicts with the narrative being construed that a bad deal is somehow palatable and can deliver a simple Free Trade Deal.

The EU is determined to continue its ability to pillage UK waters for 60% of our resources, all whilst also enmeshing the UK in regulatory alignment with the CFP through “associate” membership. (Paragraphs 118 & 120 of the Political Declaration). The Conservative manifesto may pledge to take back full control of our water, but the reality is we re-obey the CFP for the Transition period and then the EU has painted the UK into a corner on fishing with the terms of the Political Declaration.

Terms which the Withdrawal Agreement under Article 184 would legally oblige the UK to ratify as the basis of the Future Relationship and Free Trade Agreement which will be enforced by the European Court of Justice. If the Withdrawal Agreement is ratified then the UK may nominally be an “independent coastal state” but one obliged under the Political Declaration to have a fisheries agreement based on; “non-discrimination” the founding principle of equal access to a common resource. “level playing field” only achievable by binding the UK to regulatory alignment with CFP rules. To be bartered as “part of the overall economic partnership”. 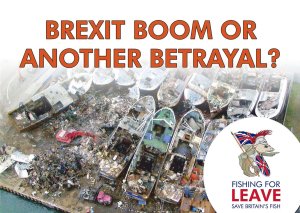 This is what ratifying the Withdrawal Agreement means. We are obliged to swallow this and have fishing levered. The EU has now spelt this out crystal clear. Surrender fishing a second time or no Free Trade deal.

It is clear to the most optimistic that trying to ratify a Free Trade Deal with the EU by the summer is near impossible. It is clear to anyone who can read that the Political Declaration is constructed to ratchet the UK into concession after concession as another “cliff edge” approaches. The key is “what the hell is Boris Johnson and the Conservatives’ response to this? If it is silence that is deafening, then alarm bells will ring around coastal communities and constituencies”. 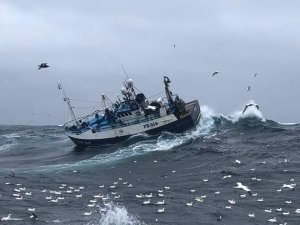 It will show that a Conservative government would have no intention of telling the EU to get stuffed but will capitulate to bully boy tactics of being asked to surrender our nation’s greatest natural resource for a trade deal. Something no other nation or government in the world will have ever done, little Iceland and Faroe… No! Norway, erm no! Yet all sell huge volumes of fish and other goods to the EU.

It shouldn’t and needn’t be like this, fishing is one of the Brexit poster children, being one of the biggest economic and political benefits of Brexit. We can automatically take back complete sovereignty over all waters and resources under Article 50 which causes all current CFP access and resource shares to “cease to apply” on exit.

Economically this repatriates a £6-8bn pound industry, injecting an adrenaline hit to maligned coastal communities which if husbanded can provide billions every year, year after year, for generations. Politically it exorcises the ghost of Edward Heath surrendering Britain’s fishing as “expendable” which still haunts the Conservative party decades later. It should be a huge totemic win for any government. Yet, the May Government, and the majority of the wider political establishment, have allowed the EU to paint us into a legal corner to the point that fishing is hanging by a thread of being surrendered a second time.

Many in the political establishment say fishing, and by association with it coastal communities, don’t really matter. Well then why is the EU pushing so hard for being able to continue to pillage our water? The answer, because catching 60% of our fish represents a third of their NE Atlantic catches. Coupled with their huge demand on our seafood exports means they have a critical dependency on UK seafood as a staple of their population’s diet.

It means the UK has a huge position of strength with a clean break on Brexit. We regain billions of resources. The EU recognises tariffs are no impediment to our supplying them and the UK will have a captive market with the EU’s huge dependency.

The response from Boris and the Conservatives is critical, are they men who will stand up for the national interest or mice who will be blackmailed to surrender something even though it will politically bury them? They MUST scrap the Political Declaration on fishing or be blackmailed into surrendering fishing for a trade deal, something Boris told the Commons in July in response to Owen Paterson “would be a reprehensible thing to do”. 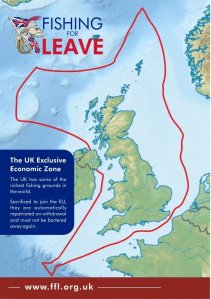 Either that or we are back to No Deal which, given the Conservative Brexiteers’ correct assertion that the EU is a diminishing part of our trade which tariffs wouldn’t unduly afflict, should be embraced now! Rather than signing up to a Withdrawal Agreement where the EU is going to use our obligation to ratify a FTA based on the Political Declaration to squeeze the UK till we scream. The EU is testing them on a totemic issue, their response will be telling, particularly in coastal constituencies.