The biggest bank in the EU has taken a very interesting turn.

The biggest bank in Europe is in the process of imploding, and there are persistent rumours that the final collapse could happen sooner rather than later. Deutsche Bank is rapidly bleeding cash, they have been laying off thousands of workers, and the vultures have been circling as company executives desperately try to implement a turnaround plan.

Unfortunately for Deutsche Bank, it may already be too late. And if Deutsche Bank goes down, it will be even more catastrophic for the global financial system than the collapse of Lehman Brothers was in 2008. Germany is the glue that is holding the EU together, and so if the bank that is right at the heart of Germany’s financial system collapses, the EU dominoes will likely start falling very rapidly.

Deutsche Bank chooses to base its largest investment banking operations in the City of London, a centre of global flows of trade and wealth. “We use this position as a global bank to keep our UK clients connected to markets, and help clients do business all over the world”.

“Deutsche Bank employs over 8,000 people in the UK, and is one of the largest employers in the City. The backgrounds of our employees mirror London as a dynamic, global city, we have an international workforce of 100 nationalities at Deutsche”.

There has been a tremendous amount of speculation about Deutsche Bank over the past several days, and so let’s start with what we know. We know that Deutsche Bank has been losing money at a pace that is absolutely staggering…it reported a net loss that missed market expectations on Wednesday as a major restructuring plan continues to weigh on the German lender.

How in the world is it possible to lose that much money in just 6 months? 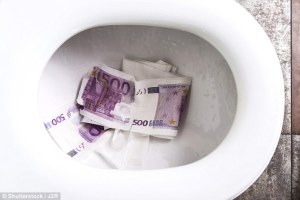 If all they had their employees doing was flushing dollar bills down the toilet for 6 months, it still shouldn’t be possible to lose that kind of money. When investors learned of Deutsche Bank’s third quarter results last week, shares of the bank went down about 8 percent in a single day.

Overall, the stock price has lost over a quarter of its value over the past year. Unless you enjoy financial pain, there is no idea why anyone would want to be holding Deutsche Bank stock at this point. As previously warned, it is eventually going to zero, and the only question remaining is how quickly it will get there. 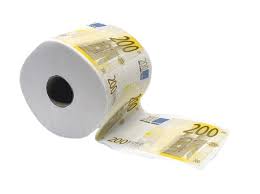 We also know that Deutsche Bank has been laying off thousands of workers all over the world…On July 8, 2019, thousands of Deutsche Bank employees across the globe arrived at their offices, unaware that they would be leaving again, jobless, just a few hours later. In Tokyo, entire teams of equity traders were dismissed on the spot, while some London staff were reportedly told they had until 11am to leave the bank’s Great Winchester Street offices before their access cards stopped working.

The truth is that anyone with half a brain can see that Deutsche Bank is dying. There have been so many bad decisions, so many aggressive bets have gone bad, and there has been one scandal after another…it is just a zombie bank that is stumbling along until someone finally puts it out of its misery!.

Money is so tight at Deutsche Bank that they have even cancelled the Christmas reception for retired employees…times change. Once upon a time (2001, in fact), Deutsche Bank was able to book stars like Robbie Williams for its staff Christmas party, with a Spice Girl turning up too just because it was such a great party. Now, according to the FT, Christian Sewing has even cancelled the daytime coffee-and-cake Christmas reception for retired employees. Of course saving a few euros on coffee and cake is not going to make a difference for a bank with tens of trillions of dollars of exposure to derivatives.

Deutsche Bank is the largest domino in Europe’s very shaky financial system. When it fully collapses, it will set off a chain reaction that nobody is going to be able to stop. David Wilkerson once warned that the financial collapse of Europe would begin in Germany, and Jim Rogers has warned that the implosion of Deutsche Bank would cause the entire EU to “disintegrate”…

Then the EU would disintegrate, because Germany would no longer be able to support it, would not want to support it. A lot of other people would start bailing out. Many banks in Europe have problems. And if Deutsche Bank has to fail, that is the end of it.

In 1931, when one of the largest banks in Europe failed, it led to the Great Depression and eventually WWII. Be worried!