Go back three days, to when Rosie Cooper told the Prime Minister “My constituents voted to leave, by 55% to 45%, but they want to ensure and believe, and it is a question of trust, that there will be certainty and decent rights for all workers as we leave the EU, and in the future. I welcome the announcement of an employment reform Bill, but given that he had his pen out in answer to my hon Friend Tracy Brabin, will he set the date and tell us when he is going to put it in this Bill so that we know when it will happen?”

But if the inference by Rosie is that workers rights have been protected because we are in the EU, hence the need for a bill, she might be well advised to read Larry Elliot 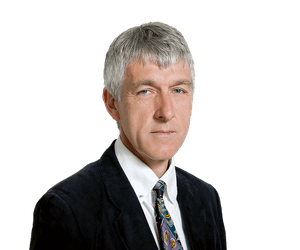 the Guardian’s economics editor, in his paper yesterday. “Don’t be fooled, the EU is no defender of workers’ rights”.

“The European project has always made life easier for capital. That’s why multinationals like it so much. Jacques Delors did one heck of a job when he showed up at the TUC conference in 1988. Britain was a year into Margaret Thatcher’s third term and the mood on the left was despondent. Organised labour had been weakened by a combination of mass unemployment, a hollowing out of manufacturing, defeat in the miners’ strike and legal curbs on trade union power.

“Fear not, Delors said. The domestic political outlook may be bleak but Thatcherism can be circumvented by action at a European level. Brussels has a plan for a social Europe that will protect workers, tame capitalism and prevent a race to the bottom.

“The Delors message was instantly popular. 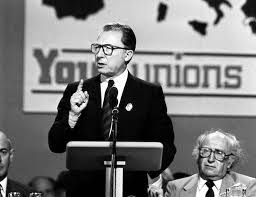 “Ron Todd, the general secretary of the Transport and General Workers Union summed up the prevailing mood when he said “the only game in town is in a town called Brussels”. Judging by the debate over the Brexit withdrawal bill, that sentiment remains powerful 31 years on. All week Labour MPs have been lining up to say that only by staying closely aligned with the EU can the socially progressive rights that Brussels has delivered be protected.

“There is one problem with this idea: it is complete nonsense. Britain’s labour market has been reshaped over the past 40 years by deregulation, privatisation and anti-trade union laws, not by the limited protections delivered by the EU, which are weaker in practice than they sound in principle. There was, for example, nothing in the draconian Trade Union Act 2016 that would have run counter to EU law, not even the clause, eventually dropped as the legislation passed through parliament, that picket supervisors would have to give their name to the police.

“Anybody who suggested to Greek workers that they should look to Brussels to protect their rights would be given short shrift. It speaks volumes that when a structural adjustment programme was imposed on Athens as the price of financial support in 2015, it was the International Monetary Fund that sought to tone down the hardline demands of the Commission and the European Central Bank, for whom the imperative was to safeguard the profits of European banks rather than to protect Greek workers.

“In consequence, the only sure way to advance workers’ rights is to elect a government pledged to full employment and collective bargaining. The notion that only Brussels stands in the way of a barrage of deregulation betrays not just a misunderstanding of the way the EU operates but also a deep and irrational pessimism on the left, a belief that the Conservatives will be in power for ever no matter what they do. The left doesn’t need the EU to fight its battles. What it needs is to make the case for better working conditions and win over a public sick of a labour market loaded in favour of employers. With a bit of self-confidence it shouldn’t be that difficult”.