the Prime Minister met the Irish Taoiseach at a wedding venue on the Wirral. No-one knows what happened, but it has resulted in what is referred to go as “going into the tunnel”. 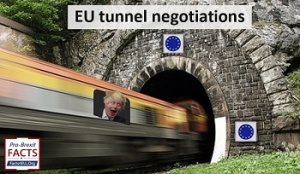 This means that serious and detailed negotiations have started again with the EU, supposedly under a news blackout. These talks are expected to last for several days. Readers will have read all kinds of speculation in the mainstream media over the past 48 hours, but the truth is that no-one knows what caused the Irish Taoiseach suddenly to tell the EU that there might be the basis for a negotiated departure for the UK from the EU, on EU terms. There are rumours, but that’s all they are.

The only reasonable inference that can be drawn from this is that the PM has moved his position since making his offer to the EU on 02 October 2019. The other inference is that the leader of the EU’s 20th smallest nation (the Republic of Ireland) seems to have an effective veto over whether the EU will allow the UK to leave the EU on a sensible basis.

“Under no circumstances, whatever happens, will I allow the EU or anyone else to create any kind of division down the Irish Sea or attenuate our Union.
“That is why I resigned over Chequers. It is a terrible moral blackmail it puts on the UK Government. We can’t have that.
“The way to protect the Union is to come out the EU whole and entire. Solve the border issues where they belong in the FTA (free trade agreement) which we are going to do.”
– Boris Johnson, 02 Jul 2019

Already the Prime Minister has reneged on his promises three months ago. His offer to the EU 10 days ago most definitely did offer a “division down the Irish Sea” and equally definitely did “attenuate our Union”. On top of this, from the EU’s outright hostility earlier in the week to the start of ‘tunnel negotiations’ yesterday, something has changed in the PM’s offer. What it is, no-on can yet be sure.

Given that the PM’s proposals already broke his promises only three months ago, we fear the worst. Worst of all, of course, is that the PM has said virtually nothing about all the other disastrous aspects of Mrs May’s surrender treaty, known as “the Withdrawal and Agreement and Political Declaration”. The border question is only one small (but important) part of the whole.

“We are told by ERG MPs not to criticise or be pessimistic, but this is about Brexit, pure and simple. We maintain our stance that the only way the United Kingdom can exit the EU properly after 11pm on 31 October is without an agreed ‘deal’ with the EU. Anything else will be a fudge of epic proportions”.

Some more quick & simple facts about the Single Market

Since the EU Ref, the EU27 have sold over £¼ TRILLION more goods to the UK than we have sold to them
Over 160 countries trade with the EU – and so can the UK – without membership of the Single Market
After 25 years, it still doesn’t work – ‘unfinished and stalled’ [Major OECD report, 2016]
The Single Market comes with unlimited EU immigration and subjection to EU laws which MPs can’t vote on
It affects ALL UK businesses, but 92% don’t even sell to the EU
The UK is the EU’s second-highest net payer, but at the end of the queue when it comes to benefiting from that.
The Single Market – Great for jobs in other EU countries. But not in the UK.