PUBLIC QUESTION TIME – at a convenient time, normally shortly after the opening of the meeting, the Chairman will adjourn the meeting (this month for an extended period of time at his discretion) to welcome Mr Clive Grunshaw, Lancashire Police & Crime Commissioner who usually wants his % increase, 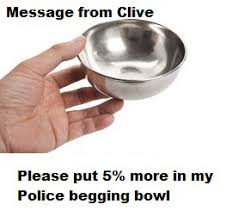 and Chief Inspector Ian Jones to discuss the Policing of Aughton. The Chairman will allow any members of the public who are residents in Aughton (or such other persons in the Chairman’s absolute discretion) to address meeting. Some might mention Neighbourhood Watch, or spending parish funds on more CCTV? Then again, the bean counters don’t like to spend the parish precept to benefit the parish.

Minute 11167 from August meeting “CHAIRMAN,VICE-CHAIRMAN, PARISH CLERK’S AUGUST MEETING WITH THE LOCAL POLICE, a brief report was given on the informal meeting held 12 August 2019. There had been 14 reported crimes since the last meeting including 1 case of fraud & forgery (Long Lane), 1 case of Theft (Back Lane), 1 assault (Prescot Road), 2 burglary (Gaw Hill Lane, Standhouse Lane), 1 missing from home (returned), 1 theft of vehicle (Mickering Lane), 1 criminal damage excluding vehicles (Mickering Lane), 2 domestic cases, 1 robbery (Back Lane), 1 public order (Noel Gate), 1 harassment (Granville Park), 1 vehicle crime (Cherry Tree Lane). In Aughton, other than reported crimes, there had been 134 incidents and 8 cases of Nuisance/ASB. Discussion took place over the antisocial behaviour around the Parish including the park off Cherry Tree Lane. At the request of local residents overlooking the park, it was agreed to lower the hedges once again and request the assistance of the Chief Inspector (copying in the Police & Crime Commissioner)”.

2019/0896/FUL DEL 69 Town Green Lane. Change of use from current (retail) to a bar serving food (A1 to A3/A4 use class). Proposed alterations to rear courtyard to provide additional external seating and revised vehicular parking. This is believed to be the “Peaky Blinders” bar proposal rumoured locally.

“The site is currently served by a side hard standing access. The proposed scheme seeks to revise the rear Courtyard provision and as such accommodate a new vehicular access point off Town Green Lane (leading to the Train Station). It is proposed to remove a section of the dwarf wall and timber panel fence to provide a suitable visibility splay (assumed 25m in each direction) and subject to further consultation with LCC Highways. There is no requirement to provide a drop kerb as there isn’t one in place currently. The existing front access is proposed to be altered to provide a DDA compliant ramped access in accordance.

In light of the above, Network Rail

is placing a holding objection on the proposal based on the points below: 1. We have retained rights within the attached conveyance that we would not want to be compromised or removed. 2. We do not believe that the land owner has any existing rights to create a new access on to Network Rail land (the station lease area). Network Rail and the TOC (Merseyrail) would not permit railway land (access to the station) being used for access which is part of the outside party proposal. That might indicate a “sod off” message?

The proposal has been called in by two local ward councillors. Talking of which, when will Aughton’s five ward councilors (three from Halsall) be reduced to two, and the WLBC 54 reduced to 36, as has been mooted? What with the upcoming senior officer redundancies, surely another 18 redundancies must be next? Bring it on!