A Scottish judge has dismissed a move to force the Prime Minister Boris Johnson to seek to delay the UK’s departure from the EU. 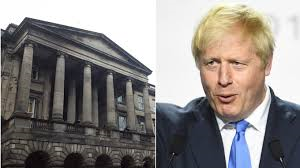 The Court of Session ruled it would neither be “necessary nor appropriate” to force the Government to ask for a Brexit delay.

Lord Pentland had been asked to consider the effects of the Benn Act. [European Union (Withdrawal) (No. 2) Act 2019]. The legislation was passed by MPs with the intention of preventing the UK leaving the European Union without a deal on 31 October.

It requires the prime minister to send a letter to the EU formally requesting an extension to the Brexit timetable. In his ruling, Lord Pentland said “There can be no doubt that the first respondent [the PM’s legal team] now accepts that he must comply with the requirements of the 2019 Act and has affirmed that he intends to do so”.

The judge said it would be “destructive of one of the core principles of constitutional propriety and of the mutual trust that is the bedrock of the relationship between the court and the Crown” if Mr Johnson reneged on his assurances to the court”.

One of the petitioners, Jo Maugham QC, said the decision would be appealed. Shortly after the ruling was publicly released, he tweeted “There are now risks of an unlawful Brexit that would not had the decision gone the other way have existed”. Maugham also tweeted “In short, we’ve lost. I expect the Inner House of the Court of Session tomorrow to hear our appeal”.

Perhaps the letter should reflect the 2016 EU Referendum result by telling the EU empire builders and the various UK remoaners, all busily defying 17.4million leavers, to “sod off”?