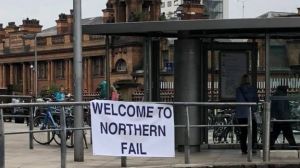 announced it had “tens of thousands” of Advanced Purchase 10p tickets” up for sale “on selected routes only”. Around 80,000 are offered, including children for just 5p, from 1st September to 30 September”. The Champion had the story.

The bargain tickets were available for journeys from Manchester Piccadilly, Manchester Oxford Road and Manchester Victoria, offering trips to Blackpool, Liverpool, Leeds and more. It was to celebrate the launch of brand new trains, and, “the end of summer”!

Well, guess what they’ve announced. “The flash sale has now ended. 80,000 10p tickets are now in the hands of lucky customers since they went on sale on 19 August”.

Northern Rail firm receives £millions in public subsidies. The RMT union has criticised the government’s decision to pay Northern rail millions more in taxpayer subsidies than previously announced. It follows the release of the firm’s annual financial statement which also reveals a sharp fall in profits. A BBC analysis of the rail operator’s accounts suggest the actual increase in subsidies was £11m.

The dispute over Northern’s funding followed an autumn in which the rail company apologised to passengers for the late running of many of its trains. It also endured a summer of “chaos” following the introduction of new timetables, which led to calls for the company to be stripped of its franchise.

Accounts for the 2017-18 financial year from Arriva Rail North, which trades as Northern, reveal a fall in annual pre-tax profits from £21m to £12.7m. This was due to “lower than expected passenger revenue growth” caused by the strikes, as well as “delays in Network Rail infrastructure upgrades and the impact of adverse weather conditions,” the company said.

The company’s financial statements show these payments were actually about £284m each year. “If that’s not bad enough, these payments are being funded by the UK taxpayer and will end up directly benefitting German state outfit Deutsche Bahn, who own Northern,” Mr Cash said. “That is nothing short of a scandal.”

Northern said the extra subsidies were due to changes in government policy. Deputy managing director Richard Allan said it was wrong to say Northern profits were being subsidised by the government. Well, he would say that, wouldn’t he!

Meanwhile, the elderly and disabled residents of West Lancashire must wonder if and when we might have a generous offer of 10p tickets from the massively publicly funded Merseyrail that benefits Spanish and Dutch shareholders?