You couldn’t make this up. 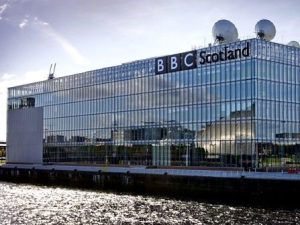 The BBC is “delighted with positive feedback of 0.1% of viewers” after spending £32million of licence fee income on a TV channel that “regularly has no viewers”. More than 20 broadcasts on BBC Scotland have received zero ratings on the official system used to measure audiences.

BBC Scotland budget is the equivalent of 207,119 licences. No viewers tuned in from households fitted with a British Audiences Research Board box. BBC Scotland is regularly watched by less than 1% of the Scottish population. Former BBC Editor Tom Luckhurst said “The figures are deplorable. But they simply confirm the central flaw in the project, there was never a shred of audience demand for it”.

On May 1st, the channel’s peak evening audience was an average of 7,200, or 0.1% of Scottish residents. But the BBC is “Delighted with the positive feedback…Measuring the performance of individual programmes will always be subject to a significant statistical error”.

The channel launched in February, hiring 80 journalists to bolster the BBC’s news offering in Scotland, as part of the BBC’s commitment to increasing its coverage in the home nations and English regions. They said that of the 21 instances when zero audiences were recorded over the period from 24 February to 2 June, seven of these were for one minute editions of The Seven just as the channel comes on air.

They added “The remaining 14 instances were all after 11pm when TV audiences to all channels are in sharp decline and our programmes in these slots are often aimed at the younger hard-to-reach audience”. Who clearly aren’t impressed enough to switch on!

The corporation claimed BBC Scotland was “bucking the trend when it comes to engaging younger audiences” and that the channel’s success would be “judged using a variety of measures”. A spokesperson said “We have always maintained the importance of looking at the overall performance of the channel rather than focusing on a few individual broadcasts.”

BBC Scotland also hosts The Nine, its flagship news and current affairs show. The broadcaster celebrated an “encouraging start” for The Nine at the end of February, despite the show seeing its audience drop 73 per cent across its first two programmes. 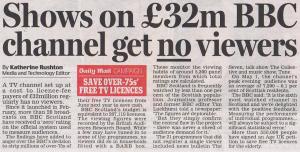 BBC director-general Tony Hall, clearly displaying remarkable  business acumen with public money, recently said “Every day our teams do an amazing job bringing independent, impartial news to audiences around the world, and today we can see just how much the BBC is valued”. In Scotland?