It was the day when the then Prime Minister, Harold Wilson

defended his decision to devalue the pound saying it will tackle the “root cause” of Britain’s economic problems.  He told us “Devaluation would enable Britain to “break out from the straitjacket” of boom and bust economics”. And, he claimed “It does not mean that the pound here in Britain, in your pocket or purse or in your bank, has been devalued”.

Moving on to 2019, pensioners are beginning to think that a straightjacket of bust economics is tightening around them, unfairly, as J Burgess writes to the Champion.

Mr Burgess describes the appalling discrepancy between what state pensioners will receive in the coming year, 2.6%, by comparison with the increases forced on them by our local authority, 4.81%. He refers to brutal victimization, the four local authorities all taking slices of the cake, He mentions elected politicians with second incomes [some with four]. He asks when will enough be enough?

Perhaps we should leave the last words to the Pension Service

Pay more tax, work longer, back to the days of Beveridge as it assumed old age poverty was an absolute income problem rather than a relative income problem. In 1971 the 25p a week Age Addition from 80th birthday was introduced. That equated to 4.2% increase to the state pension. By 2008 it was worth a disgraceful 0.3% of the state pension and today, 2019, it doesn’t register with any value at all!

As it happens I have received an amazing letter from the Pension Service.

They have awarded me my Age Addition 25p. I just need to survive for a few more weeks. They tell me I can appeal against the decision. So I thought, I’ll appeal because I think it should be £25 a week! But alas, they do a Mandatory Reconsideration Notice as a matter of course. 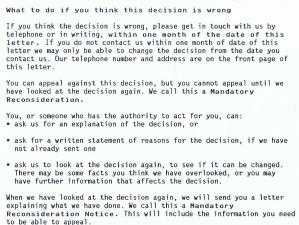 Why do they persist with it at all, the costs of these letters must surely exceed the value of it? And, to answer Mr Burgess, enough will be enough when West Lancashire Borough Council cuts its elected numbers to 18 from 54 with a commensurate cut in officialdom, the police are funded from Whitehall, and Lancashire County Council stops the “special responsibility allowances” for 37 of the Tory group!