Alastair MacMillan runs White House Products, a company which exports to over 100 countries around the world including to customers in every other EU state. He wrote the following article.

A cautionary tale of disconnect

between the Conservative Party in Parliament and in the country.

“While the events contained in the following tale are imagined, the author contests that they bear an uncomfortably close similarity to reality…We join Sir Toby Amadeira returning to his West Country constituency of Crumblybottom to meet some of his local Conservative Association officials. He is in high spirits after a good week: having publicly threatened to resign from his job as Minister for Paperclips at the Ministry of White Elephants

he is still in his job and the Prime Minister has changed her policy. A few media interviews and well-placed articles by him and his colleagues seemed to rattle her enough to promise a vote on an Article 50 extension if her Withdrawal Agreement doesn’t get passed. He muses that we may yet be able to kill off this Brexit business!

“He is therefore in a good frame of mind as he alights from the train in Crumblybottom and walks to the constituency office. The meeting he is having is a regular one he has to help maintain his profile in the constituency and – with the local elections coming up – to catch up on the work required to try and dislodge the last Lib Dems from Crumblybottom Council.

“In the office he is met by Caroline, his association Chairman; Sarah, the Deputy Chairman (Political); and Sue, the local agent. After the usual pleasantries Caroline opens the meeting…

Remain in a Brexit wrapper

“Caroline: We have been watching the goings on in the Commons with increasing dismay. Toby: Why? Sue: We want Brexit and the Prime Minister’s deal is not Brexit – it is Remain in a Brexit wrapper. Sarah: We all campaigned for Leave and won – and you promised as a democrat to respect the vote and make sure it was enacted. Caroline: Now by forcing the PM to put No Deal to a vote you are effectively seeking to take No Deal off the table, which was our only hope of escape from the PM’s awful proposed treaty.

“Sarah: By your actions we may end up having elections to the European Parliament and I have to tell you that if that comes about, there is nobody in this association who will campaign for the Conservatives. We may not work for the Brexit Party, but we will all vote for it.

“Sue: As I see it, Toby, the Conservative Party is finished if you vote for an extension of Article 50; people will see it for what it is – a way to derail their 2016 vote and they will be justifiably livid. Sarah: You promised to deliver Brexit and that means, as the PM has said repeatedly, No Deal is better that a bad deal. The proposed treaty with the backstop and many other hostages to fortune is a thoroughly bad deal. We therefore need to take the only route of escape and that is by going WTO on 29th March.

“Toby: Feelings are obviously strong on this, but I didn’t realise that you felt that strongly about it. Caroline: At the start of the Second World War, MPs were all for suing for peace with Hitler and it was the people who made sure that the country fought and ultimately won. We are at a similar point now but this time we have two Conservative parties: the one in the country, despairing of the one in Parliament, seeing WTO as the only option, whilst those sitting comfortably on the green benches are happy to surrender to the EU.

Toby: But Caroline, the chaos of No Deal would do us far more harm. Sue: If you lot got your act together, any chaos would be minimised and we know that most of the scare stories are way over done. Toby, you have to look long term and after some initial bumps we will be able to fully benefit from Brexit in a way that will never be possible with the PM’s deal, which just extends the state of purgatory we are in at the moment.

“Sarah: We know from the motion passed at the recent meeting of the National Convention that most of our colleagues feel the same way. However, you in Parliament don’t seem to get the message. Caroline: Now the PM wants to promise Labour that we will keep labour laws in line with those in the EU in order to tempt Labour MPs to back her flawed deal. Are you not even Conservatives any more…?” 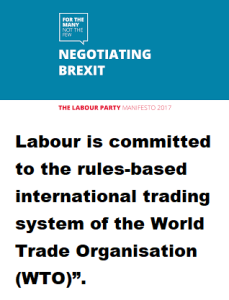 What a dog’s dinner!