To quote John Heywood’s 1546 glossary “A dialogue conteinyng the nomber in effect of all the prouerbes in the englishe tongue “But there is no foole to the olde foole, folke saie”. John Heywood was a Tudor playwright and musician. He knew what he was talking about, and, no surprise, he survived into his eighties.

Talking of old fools, the other day MP Vince Cable tweeted in a highly emotive manner about the Defence Secretary of “Presumably using the part of the army which he hasn’t already committed to dealing with civil unrest and food queues after a disruptive Brexit”.

Which brought the response to Cable “Bless, think you are confused over the risk of civil unrest. It’s not Brexit that will cause that to happen. Still, at your age it’s no surprise that you get things muddled up” which would put a smile on many old lips!

When the old shafted the young

Who could forget Cable claiming older Brexit voters with views “coloured by nostalgia from an imperial past” had imposed their will on a younger generation more comfortable with the European Union? 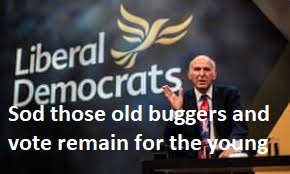 Cable told the press “To describe such masochism as ‘martyrdom’ is dangerous. We haven’t yet heard about ‘Brexit jihadis’ but there is an undercurrent of violence in the language which is troubling”. Cable, aged 74 himself, added that the “self-declared martyrs” appeared to be “predominantly elderly”. “The martyrdom of the old comes cheap, since few have jobs to lose” he said “The old have comprehensively shafted the young”.

But hypocrisy lurks around every corner

The LibDems have decided to flagrantly ignore another result in a referendum they actually called themselves, using the excuse that more old people voted the way they wanted. Richmond Lib Dems

held a vote to gauge public support for their plan to reduce speed limits to 20mph across the Borough. Almost 10,000 people took part in the vote, which split 51% to 49% against them.

Never mind democracy. Despite the vote, Richmond’s Lib Dems have decided to ignore the result and implement most of their original plans. They used the fact that 60% of over-75s supported the proposals. And that overruled the will of the people of Richmond upon Thames. Quote “The Consultation also found that vulnerable road users were overwhelmingly supportive of the proposals with 65 per cent of under 19s and 60 per cent of over 75s supporting the proposals”. The Lib Dems stand for more personal freedom. Really, they do!